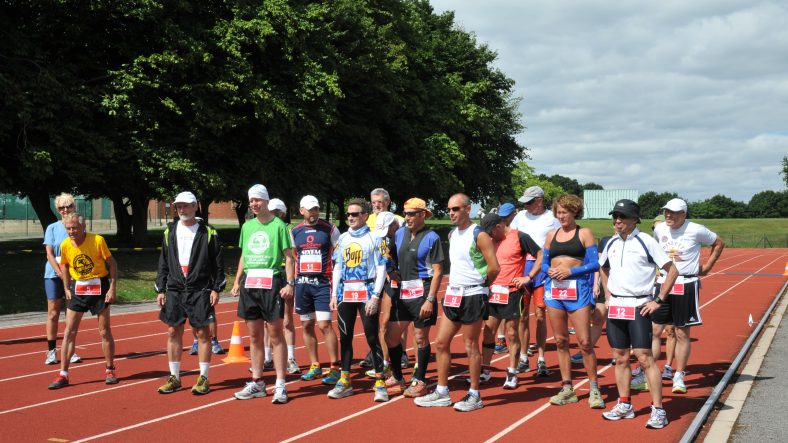 After an absence of 23 years on the UK ultrarunning calendar, the return of the 6 day race to the UK was a much anticipated opportunity for a new generation of ultrarunners from around the world. It was felt fitting to invite the reigning British 6 day champion to come to the Radford Track at Radley College Oxford to start the British Ultra Fest, a trio of standard ultra distance races – 24 and 48 hours and the 6 day.

James Zarei carved his name in modern multiday history by coming tantalisingly close to breaking George Littlewood’s British 6 day record – a record that has stood since 1888 of 623 miles 1,320 yards set at Madison Square Garden, New York. Zarei finished one mile short of the record after having to wait for 2½ hours whilst a football match took place on the infield, costing him the record. Having won Spartathlon twice, there is no doubt that Zarei is the number one multiday talent to have emerged in the UK in the modern era.

Also in pursuit of that record was William Sichel, the leading UK multiday runner over the past few years with a personal best of 532 miles 983.15 yards. William had run eight previous 6 day races including the Self-Transcendence 6 day in New York in April this year.

As this was the first track 6 day for a few years, anywhere in the world, a few older hands were eyeing age group records. There was an excellent chance that new bests would be set and as well as the more experienced runners there were 10 runners attempting their first 6 day race including husband and wife duo John and Lorna Maclean from Scotland.

24 runners made it to the start line of the 6 day race and when James blew the starters horn, runners from 12 countries began their challenge in perfect, sunny conditions.

Kenji Okiyama took an early lead but by the end of day one was neck and neck with William on 185.6 km both having a few kilometres on Didier Sessegolo. Christine David led the women in fifth place overall with 170 km – 10 km ahead of Liz Bauer. Lorna Maclean was in third with .

Through day two it was still very close at the top of the men’s race. Kenji began to slow as the pace between Didier and William grew intense reaching the 48 hour point with William one lap behind. William and Didier had both been at the 2012 No Finish Line with Didier taking the title there and also won the 2013 French Ultra Fest at the Circuit du Var, Luc-en-Provence in May where he ran 814,217.14 km.

Christine, despite having tummy troubles still maintained a 10 km lead over Liz.

The great weather persisted through day three. Didier edged a two km lead over William while Kenji was holding on to fourth place after Christian Ritella had zipped by finishing the day with a new Swedish 72 hour record of 427.6 km.

Christine had a better day and stretched her lead to 19 km over Liz moving into fifth place overall while Lorna made steady progress finishing the three days with 283.6 km.

On the casualty front, Baranyai Máté developed what appeared to be shin splints, a very difficult injury to deal with during a race but he bravely struggled on making the most of the experience until after covering 32 km on day 4, he retired in the early hours of day 5.

Even though William was having less time off the track than Didier, the Frenchman was moving slightly quicker and began to pull away with a 15 km lead by the end of day 4. William was 45 km ahead of Christian, Christine was in fourth overall and the ever entertaining Kobi Oren had nosed a couple of laps in front of Liz in sixth place.

With still ambient temperatures, the weather that had turned on Wednesday with rain and drizzle and showers late into the night, improved in time for the start of the 48 hour race, day five for the 6 day runners, bringing fresh energy and faces to the track.

Petri Pertilla who came all the way from Finland made a strong start, leading the 48 hour field from the early stages followed by Peter Simpson who moved into second place around the eight hour mark ahead of Heather Foundling-Hawker who shortly ran into problems and finally stopped around the fifteen and a half hour point. Horváth Jenő who is the President at Unixsport, the organisers of the Emu 6 day & 48 hour race in Baltonfüred in Hungary and who kindly donated a free entry into their 2014 6 day race for the winner of the British Ultra Fest, moved into third place in the men’s race by the end of the first day. Pauline Walker from Scotland, down with her sister Fiona Rennie seemed to be having a great time covering 139 km by the days end good enough for fourth place overall.

Day five for the six day runners saw Christian Ritella run 165 km to ease him into second place, just over a kilometre ahead of William. An awesome performance for the fifth day of a 6 day race. However William had been taking regular breaks and was maintaining a very steady pace and soon regained that second spot behind Didier who had 31 km between them on the scoreboard at the end of Day 5. Christine continued to put space between her and Liz who had her eyes firmly fixed on the women’s 6 day age group record. Not the only one with records in mind…

10 am Friday morning was the start of the 24 hour race. Race starter James Zarei set the 25 runners from 7 nations off on the final event of the week-long festival, circling the track joining the warriors approaching their last leg of this unique multiday race and bringing the total number of runners on the track to 61 – a fair-sized crowd that had us wondering beforehand if it would be too many. It seemed that people could handle it though being constantly lapped for the first few hours probably had an effect.

Kevin Doyle took an early lead over Italian Antonio Tallarita and maintained a great pace until around about midnight when it became clear that he had overcooked it and needed a little extra-curricular activity to put the wheels back on. Mark Ketteringham had some 5 km at the 12 hour point over Welshman Jeremy Mower who was just ahead of Mike Aylmore.

In the ladies race Anne Green was setting the pace with 93.2 km at the 12 hour point ahead of Ruth Benzimra and Penny Darmody. The ladies and the men all held their positions until the end with Antonio Tallarita covering 204.9 km and Anne running 166.3 km – good enough for 6th place overall.

With weather conditions remaining dry but cold throughout the final night, the 6 day runners were now looking at a handful of hours to reach their targets and there was still movement in the placings for the top ten runners.

Race leader Didier Sessegolo maintained his presence and pace to claim a third multiday victory in 9 months with 829.9 km –  the best mileage this year in the world at a 6 day race.

Christine David finished with 740.5 km, setting a new French women over 55 age group record and this was also the world’s best women’s 6 day performance of the year. A great double for France.

Liz Bauer’s debut at the 6 day distance was good enough for fourth in the world this year. Having set a record for running 32 one hundred mile races in 2012, this was still new territory for Liz and her determination was powerful until the end.
Martina Hausmann, perhaps the most experienced multiday runner at the event set a new age group record despite the fact that Martina has seen the best her body has to offer but her spirit remains as unyielding as ever.

With the debutants all setting new benchmarks, Aku Kopakkala and Miikka Backstrom setting new personal bests and all the records that were set, this was an opportunity for self-transcendence that was seized and manifested with great spirit summed up by the spontaneous gathering of the 6 day runners at the end of the race for which the organisers and crew were happy and proud to have been of service.

Subscribe for free to get the latest news and updates of forthcoming events.
* indicates required